New reports suggest that the severe weather, especially hailstorms, that recently hit France have damage vineyard production in some of the country’s grape growing regions, most notably Cognac.

A region’s ‘terroir’ is vital to its ability to produce good wine. Explaining this somewhat nebulous concept, a wine importer called Valerie was quoted by Scientific American saying: “Terroir is a specific set of natural elements that all come together in harmony to produce a very specific outcome. The soil, the exposure to the sun, the drainage, the proximity to water, the fog, all of these things, they all come together in an expression that we find beautifully in the grape.”

In other words, the weather a region experiences can dramatically impact its ability to produce wine. We saw in France recently, for instance, how frost can damage winemaking grapes. The French region of Burgundy was subjected to heavy frosts this spring and this damaged the opening buds and young shoots on many of its vines, ruining the quality of some of its grapes. Estimates suggest that 46% of Burgundy’s vineyards have been damaged by more than 30%. 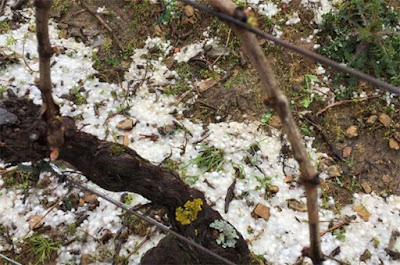 Reuters reports that France experienced another bout of extreme weather, including hailstorms, at the end of May, impacting grape harvests in Chablis, Beaujolais and most notably Cognac. Based in South-West France, Cognac is known for producing Cognac Brandy. Like Champagne, Cognac must be produced according to specific rules; for instance, all Cognacs must be made from high-acidity grapes like Ugni Blanc.

A spokeswoman for the Bureau National Interprofessionnel du Cognac (BNIC), the Cognac industry trade body, commented. She noted that an astonishing 27.5 millimetres of rain and almost 15 centimetres (cm) of hail dropped down on affected areas in just 15 minutes. Some wine producers, she continued, said that they saw hailstones that were 1.5cm long; roughly the size of a quail egg.

This had a devastating effect for Cognac producers. They have reported that 5,000 to 6,000 hectares, equating to 6% to 8% of their vineyards, were damaged badly by the showers and heavy hailstorms. Continuing, the spokeswoman said: “There are places where they have been 100% destroyed.”

It may be hard for grape growers in Cognac, Chablis and Beaujolais to recover. France’s biggest farming union, the Fédération Nationale des Syndicats d'Expoitants d'Agricoles, said in a statement that not only could this event restrict 2016 harvests, it could also impact future harvests. Explaining they noted: “These hail bursts ravaged many vineyards, making future harvests uncertain or impossible.”

We do not know for certain what kind of impact these hailstorms could have on Cognac production right now. Potentially however, they could damage the Cognac-making trade for years to come and that would be a huge loss, as Cognac is a brandy of the finest quality. If you want to see why so many people around the world have a passion for Cognac, purchase the Remy Martin XO Champagne Cognac from Ideal Company today, so you can sample this truly superior product!
Posted by Ideal Wine Company at 09:40

If you’re a fan of Veuve Clicquot sparkling wine, you may be excited to learn that the firm has recently released a new Champagne which is designed to serve as a killer summer cocktail mixer!

Over the years, Veuve Clicquot Champagne have developed a reputation for excellence. This is because throughout its history, Veuve Clicquot has been an extremely innovative Champagne house, with its founder Madame Barb Nicole Clicquot Ponsardin, setting the bar extremely high. Madame Clicquot is famous for creating the riddling table, an invention which revolutionised the Champagne industry.

Never one to live in the past, Veuve Clicquot is currently focusing on finding innovative ways to move into the 21st Century. The business recently, for instance, launched a clever new marketing campaign to target younger drinkers, who are fast becoming one of Champagne house’s most important demographics. Drawing on Madame Clicquot for inspiration, the campaign features online videos which show why Veuve Cliquot is such a standout product.

The experts at Veuve Clicquot also realise that increasingly, people aren’t just drinking Champagne straight anymore. If you find the right ingredients, this signature French sparkling wine can make a fabulous yet versatile cocktail mixer. Industry portal The Drinks Business reports that Veuve Clicquot have capitalised on this trend by releasing a new product which is designed to be a cocktail mixer.

The product is the second ‘Rich Rose’ Champagne to be launched by Veuve Clicquot and is currently on sale at Selfridges for £64.99. This is a blended rose which has been aged for at least three years before release. Veuve Clicquot has been blending roses ever since the days of Madame Clicquot herself, so the company definitely has the experience required to create a fabulous blended drink. 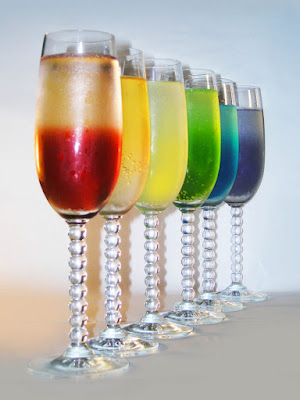 This current rose features 12% red wine and as far as grape content goes, it contains the same mix as the previous Rich Rose; 45% Pinot Noir, 40% Meunier and 15% Chardonnay. We should note that in both this year’s and last year’s Rich Rose, there has been more Pinot Noir to raise the product’s sugar content to 60 grams per litre. This is to increase its suitability as a mixer. Meanwhile, Veuve Clicquot’s Rich Roses include Meunier grapes to ensure the products boast “fresh, fruity and gourmand” notes.

Veuve Clicquot advises that that Rich Roses are served over ice in a wide-brimmed glass, accompanied with fruit, to ensure they provide a stunning drinking experience. Suggested ingredients for the drink include pineapple, lime, ginger and even Earl Grey Tea, to give it a unique twist! Ideal Wine Company are impressed at how Veuve Clicquot has capitalised on its penchant for innovation to create a product which is sure to help you concoct delicious summer cocktails!
Posted by Ideal Wine Company at 16:28

How to pair seafood and wine - Ideal Wine Company

With summer coming up, you may want to break out your seafood cook book. These lighter dishes can be perfect for the hotter summer months, especially when you team them with a really good wine. But which wines should you pair with seafood?

Luckily for you, wine information portal Vinepair has just released an infographic which lists the 14 essential wine and seafood pairings.

The pairing depends on the flavour profile of both the wine and seafood dish in question. For instance Pinot Noir works well with Salmon because the wine stands up to the richness of the dish but Champagne goes better with dishes such as fish and chips, because the fizzy wine cuts through the oil perfectly. This signature French sparkling wine also matches with the decadence of Oysters.

If you are partial to some fish and chips and want to try this paring for yourself, why not take a look at Ideal Wine Company’s fantastic selection of Champagnes. We supply the first rate Champagnes you need to perfectly complement your seafood this summer!
Posted by Ideal Wine Company at 11:00

Ideal Wine Company previously reported that a new wine museum will be opened in Bordeaux this year. We can now reveal that this attraction, which has been dubbed the ‘Guggenheim of wine,’ has officially been opened.

The museum, called the Cité du Vin wine centre, opened on the 1st June 2016 after three years of construction. Set to receive more than 45,000 visitors every year, the space provides guests with an “immersive, interactive, multi-sensory experience” which explores wine cultures across the planet.

Cité du Vin was designed by French architects Nicolas Desmazières and Anouk Legendre. They gave the 13,350 m² building a curved structure which is meant to resemble the swirl of wine as it flows into a decanter. The Cité du Vin bears a strong resemblance to the iconic Guggenheim museum in Bilbao Spain, which is why it has been nicknamed the ‘Guggenheim of wine.’ New reports suggest that it looks set to be just as popular with tourists all over the world!

Metro has labelled the Cité du Vin a “wine theme park” and they make a good point. The Bordeaux-based space may not feature rollercoasters or merry-go rounds, but it does have a wine boat ride attraction. Basically the museum includes a 90 metre pontoon tied to the bank of the nearby Garonne River. You can take a water shuttle and travel from the museum to various Bordeaux vineyards.

But the Cité du Vin’s star attraction has to be its worldwide vineyard tour feature. The museum has 23 rooms which you can visit to “take a tour of the world’s vineyards,” offering you the chance to find out about different wine making traditions from various regions. By visiting this attraction, for instance, you can find out about why wines from Bordeaux have an excellent reputation. 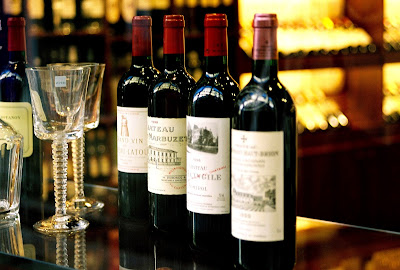 Tickets for the Cité du Vin provide great value. Tickets cost €20 for adults, €10 for young people and €8 for children, with kids under six entering for free. With your ticket, you can also gain access to a number of other fantastic attractions. These include a 600m² wine cellar boasting over 10,000 bottles and the panoramic Le 7 Restaurant on the site’s seventh floor.

The Cité du Vin wine centre is set to be one of Bordeaux’s most popular attractions. Known for its robust wine making tradition, Bordeaux already attracts a lot of wine enthusiasts every year. The Cité du Vin is a wine lover’s dream, boasting a range of fun, interactive attractions which are incredibly unique. No matter which kind of wine you love, you may want to check out this ‘Guggenheim of wine’ because it’s so comprehensive that it’s sure to have something that you’re destined to enjoy!
Posted by Ideal Wine Company at 15:02